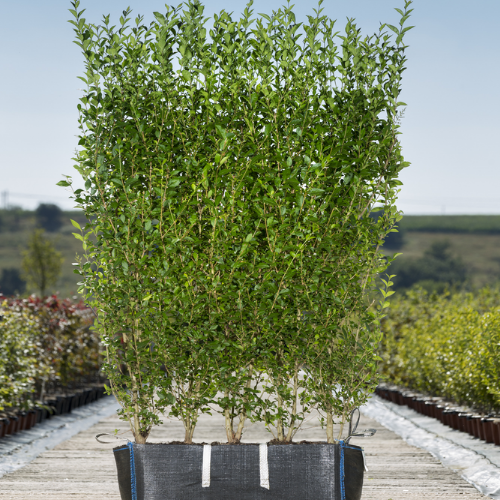 Instant hedging - Green Pivet (Ligustrum ovalifolium) in a hedge bag is the traditional British Hedge. This variety of privet is one of the most popular types of hedge in this country.

It is also known as the oval leafed Privet. It was introduced from Japan in 1885 and is suitable for growing in a wide range of soil conditions and locations including in shady locations, including under trees and even in areas of tree roots where nothing else will grow.

Left unpruned it will produce white flower heads followed beautiful black berries. With regular trimming at least 3 times per year you will get a very tight and smart hedge. We recommend pruning the top slightly narrower than the base.  If trimmed this way the Green Privet (Ligustrum ovalifolium) Traditional British Hedge Plant will retain leaves all the way to the ground.